As can be seen from the photos below about 40 members enjoyed the inaugural Stableford Shootout today. The day actually began with a Gobbler Shootout between Janice Adlard and Sally Hopkins who had scored the same number of Gobblers throughout the 2015 competition. Sally and Janice each had three attempts of chipping the ball into the hole from off the green. Sally Hopkins was declared the Gobbler Champion as she landed her ball closest to the hole. Congratulations to both Sally and Janice.

Our ten Shootout Finalists nervously took to the first tee. Colleen Henry was the official Adjudicator for the day. Caddies were ready, Markers were ready and the gallery watched nervously too, feeling for each of the ladies. As each hole was completed, the player with the lowest number of Stableford points was eliminated, or in case of a tie, a chip off took place with the player closest to the pin continuing in the Shootout and the other player eliminated. To be eliminated meant that you were awarded a Yellow jacket, a glass of champagne, a prize and a ride to the next hole in the celebration golf cart with President, Judy.

One by one the players succumbed to the lure of the ride in the golf cart - Charmaine, Di Jackson, Ronalda, Di Rudd, Margaret, Sally. Annette survived a chip off on the 3rd and Michelle survived a chip off on the 4th. Michelle survived until the 7th and Annette was eliminated on the 8th. This left the final pairing of Cheryl Baker and Jenny Chapman to contest the 9th for the title of Stableford Shootout Champion. Tension mounted as both were tied at the finish of the 9th. A final chip off was required to decide the WINNER.  CHERYL BAKER, who had played brilliantly from Hole 1, struck the winning stroke to become STABLEFORD SHOOTOUT CHAMPION for 2015 with Jenny Chapman the runner up.

There were some nice little touches to today. Joan O'Connell arrived and gave each of the Finalists a small memento, individual caddies looked after their charges, the gallery cheered for each player,  and, as a fine gesture to players and gallery alike, Monica Haines saw how heat affected everyone was and bought out ice blocks for everyone.  It was a very special event showcasing our Ladies support for each other.  The afternoon was concluded with the final presentation to Jenny and Cheryl and a very nice afternoon tea. 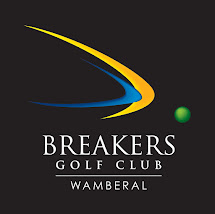